After selling their dairy farm in Tasmania in 2009, the Taylor Family purchased Byron Gourmet Pies in 2011. The company’s previous owners, Jean-Paul Signoret and Teresa Woodland, had created Byron Gourmet Pies in 1996 when they were asked to bake pies for the Byron Bay Blues Festival. The pies became so popular that Jean-Paul and Teresa dropped their local French pastry business and focused solely on pie making. Jean-Paul’s passion for pastry making and travel set the foundation for the creation of some of the most exciting, original and exotic, gourmet flavours, for which the company is now famous.

While in Tasmania and WA, the Taylors’ background had been in organic agriculture, but after several holidays in the Byron Bay region, their son, Alex, saw an opportunity to purchase Byron Gourmet Pies from Jean-Paul who had created an excellent organic range of products including vegan, gluten- free and spelt selections. The Taylors jumped at the chance to take over Byron Gourmet Pies, which has become a leader in the production and distribution of organic pies and rolls in Australia.

The company now uses a variety of organic and local ingredients in their pie production, including organic flour from Wholegrain Milling and Kialla Flour, Mauri, certified organic, free-range and grass fed Tasmianian beef, biodynamic rice and tofu. All our pies are Preservative Free and GM Free.

Just like they value the use of quality local ingredients, Byron Gourmet Pies plans to remain a family company whose aim is to continually fine tune their product lines and to use only quality ingredients to produce organic pies and pastries of the highest standard.

Byron Gourmet Pies feels lucky to have retained a great team of people, including many who have been with the company for several years. As Kiwi Pete, Byron Gourmet Pies’ longstanding cook, says, “I put a lot of blessings and love into our mixes, that’s what helps make our excellent pies and rolls.”

While Byron Gourmet Pies continues to distribute their own pies in Northern NSW, Gold Coast with distributors in Brisbane, Sydney, Melbourne and Adelaide the remaining states are handled by private distributors.

Byron Gourmet Pies looks forward to maintaining and growing their status as one of the finest gourmet pie-makers in Australia. 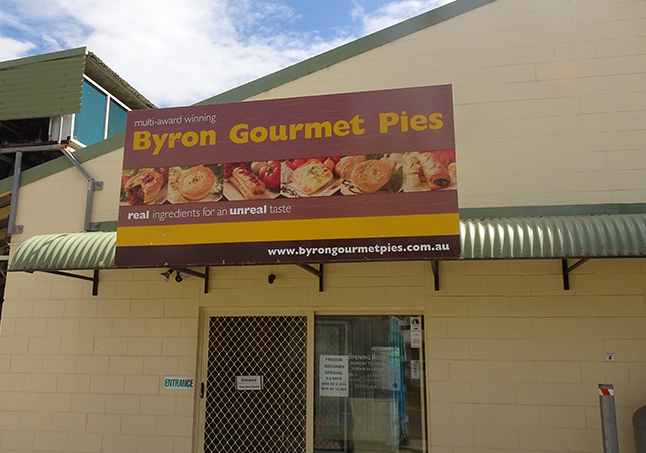 Jean-Paul Signoret and Teresa Woodland, create Byron Gourmet Pies in 1996 when they bake pies for the Byron Bay Blues Festival. The pies are such a hit at the festival, they decide to focus solely on pie making, dropping their french pastry business. During the next few years, all the local cafe’s and health food stores in the norther rivers stock Byron Gourmet Pies with no end to the demand.

By 2001 Byron Gourmet Pies has grown and is well established in the pie making world with a Gold Medal win at the 2001 ‘Great Aussie Meat Pie Competition’. Jean-Paul’s passion for pastry, travel and exotic flavours from around the world set the foundation for the creation of some exciting and exotic, gourmet flavours. This is a game changer in the pie world with lots of medals and wins to come.

The pies are now getting more popular and with the production space not large enough to handle the amount of orders, Jean-Paul and Teresa decide to move to a larger facility in the Byron Arts and Industry estate, they set up shop at no 2 Centennial Circuit. By now the menu has grown to include more flavours with lots of happy customers.

The Taylor’s sell their organic dairy farm in Tasmania and move to W.A. with a focus on organic agriculture, over the next few years and several holidays to the Byron shire, Alex Taylor (the son of Suzanne and Stuart Taylor) see’s an opportunity to purchase Byron Gourmet Pies.

In 2011 Stuart Taylor and Suzanne Taylor seize the opportunity and purchase Byron Gourmet Pies, taking over operations. From here on Byron Gourmet Pies continues to grow, becoming a leader in the production and distribution of organic pies and rolls in Australia.

Production has grown and Byron Gourmet Pies are now well established in most health food stores and cafes across the nation. New processing equipment is upgraded and the company is still winning more awards.

Byron Gourmet Pies is now working on new flavours to expand the menu ranges a little more including the vegan and gluten free options. There’s some exciting new developments happening which the whole team at Byron Gourmet Pies are proud and eager to share.

1996Jean-Paul and Teresa start out with a small stall at the Byron Bay Blues Fest. No one could see how popular these pies would one day become.

2003Production is getting heavy and the space isnt large enough, so Jean-Paul and Teresa move to a new location with a larger space for production.

2011The Taylor family seize the opportunity to purchase Byron Gourmet Pies and take over opperations.