The Surprising Reason Why Veganism Is Now Mainstream

Home » Articles » The Surprising Reason Why Veganism Is Now Mainstream 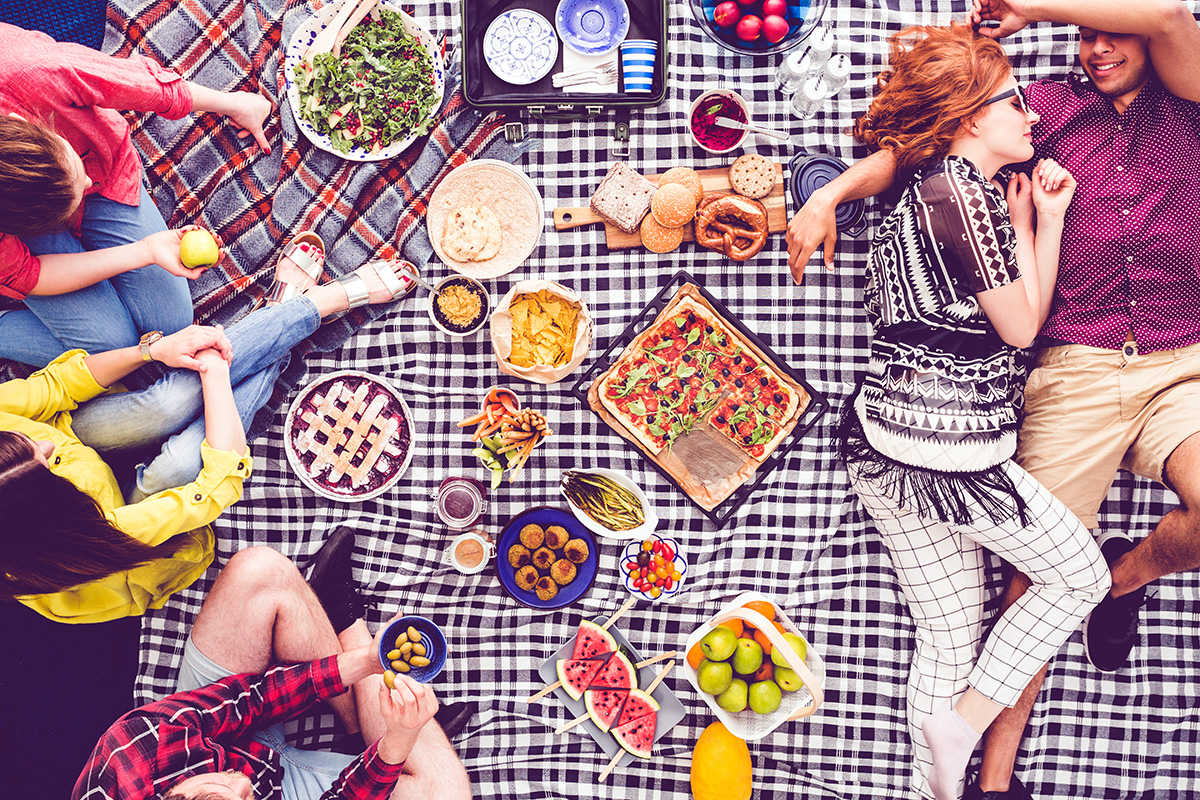 The Surprising Reason Why Veganism Is Now Mainstream

We came across this great read by Olivia Petter from the Independent on the rise of veganism which is something dear to our hearts, living in Byron one could argue it’s the vegan capital of Australia with lots of plant based options on every corner. However long before the popularity of plant based eating began, way back in 1996 Byron Gourmet Pies came out with two vegan pie recipes which have been popular ever since within the growing vegan community.

Since those early days, we’ve slowly begun to expand on our vegan pie range which is growing to now include four vegan pies along with an additional three gf vegan pies and a few more new plant based pie recipes in the pipelines for mid 2020. It’s a fascinating growing market with a huge potential and big demand for healthy wholefood plant based options and we’re proud to be a part of it.

Long gone are the days when vegans were reduced to peace-sign-making stereotypes plagued by bad breath and ill-fitting tie-dye T-shirts.

With more than 3.5 million Brits now identifying as vegan and more than 57 million #vegan posts on Instagram, it’s safe to say that plant-based living is more popular than ever before.

No longer associated with the scrawny – David Haye and Tom Brady crushed that cliché – veganism has officially permeated into the masses. 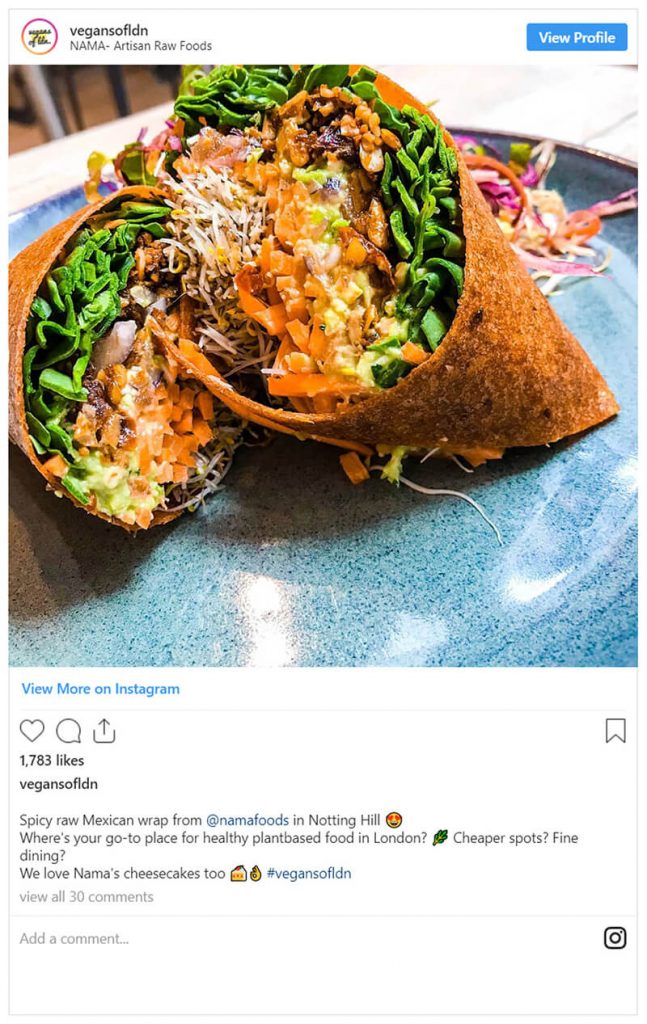 So how did veganism go from a mocked subculture to a mainstream lifestyle choice?

According to Google trends, searches for “veganism” have been rising steadily since 2012 in a similar trajectory to “Instagram”. 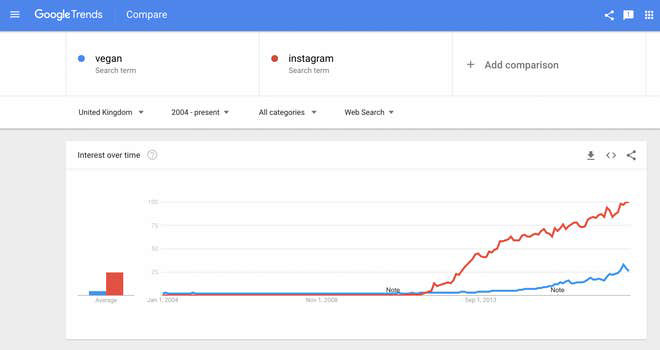 While the photo-sharing app was launched exclusively on iOS in 2010, it became more widely-used in 2012 when a version for Android devices was released.

Could it be that Instagram is responsible for veganism’s PR overhaul, in which it has transformed from a kooky diet to an aesthetically-pleasing cacophony of “earth bowls” and “green goddess” smoothies?

This is likely because their dietary choices are driven by their fundamental beliefs, she explains, which can boost their social media activity as they are keen to share their passion for veganism with the world.

Plant based dining is now evolving to have bleeding burgers

Obviously, Instagram is a visual-first platform and is therefore the easiest one on which to share aspirational lifestyle habits.

“The personal nature of the platform allows individuals to integrate veganism into relatable and stimulating posts whilst simultaneously dispelling a lot of misconceptions and stereotypes around what it means to be a vegan,” she added.

If you want to spread a message, such as the personal, ethical or environmental benefits of going vegan, showing people is always going to be far more powerful than just telling them, “this is where Instagram triumphs in boosting veganism’s appeal,” said Simon Winch, chief executive at Veganuary. 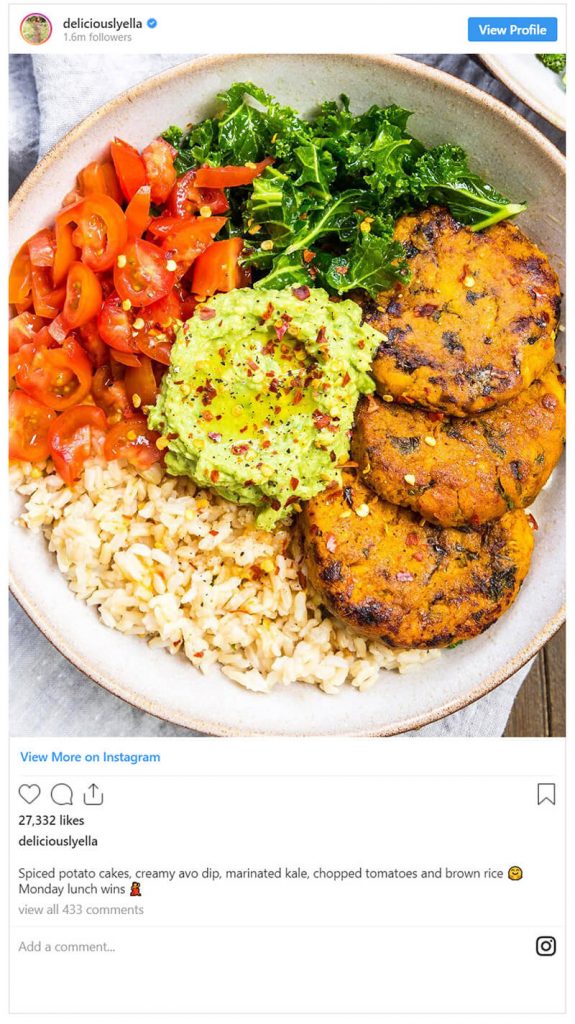 “It’s the go-to place for food inspiration and lots of plant-based foods look very appealing, which makes the images popular among users,” he told The Independent.

A key part of what makes vegan content so stimulating is the growing community of social media influencers advocating the lifestyle as part of their brand.

Ella Mills started documenting her plant-based lifestyle on her blog, Deliciously Ella, in 2011, the success of which has made Mills a household name whose success that transcends beyond the vegan community, resulting in multiple book deals, delis and several food products – she also boasts 1.2 million followers on Instagram.

For Mills, Instagram has been fundamental to raising the profile of her brand and for dispelling myths that a plant-based diet is dull and limited.

“It has enabled plant-based eating to be conveyed as something colourful, abundant, vibrant and delicious, which has helped shake the preconceptions of it being more like ‘rabbit food!’” she told The Independent.

“Ultimately our meals need to be delicious and enjoyable to be sustainable, and I think Instagram has acted as a tool to show that plant based meals can work for this, helping to capture our imagination.”

The hashtag system available on the platform could also be credited to bringing veganism into the mainstream, as it makes the content shareable and helps to build a community, Winch adds.

“Those concerned about missing out on their favourite foods can simply do a search for, say, #VeganPizza and they’ll find over 300,000 posts that prove you don’t have to miss out on pizza after all!”

This can also make it easier to discover plant-based dining options, he added. 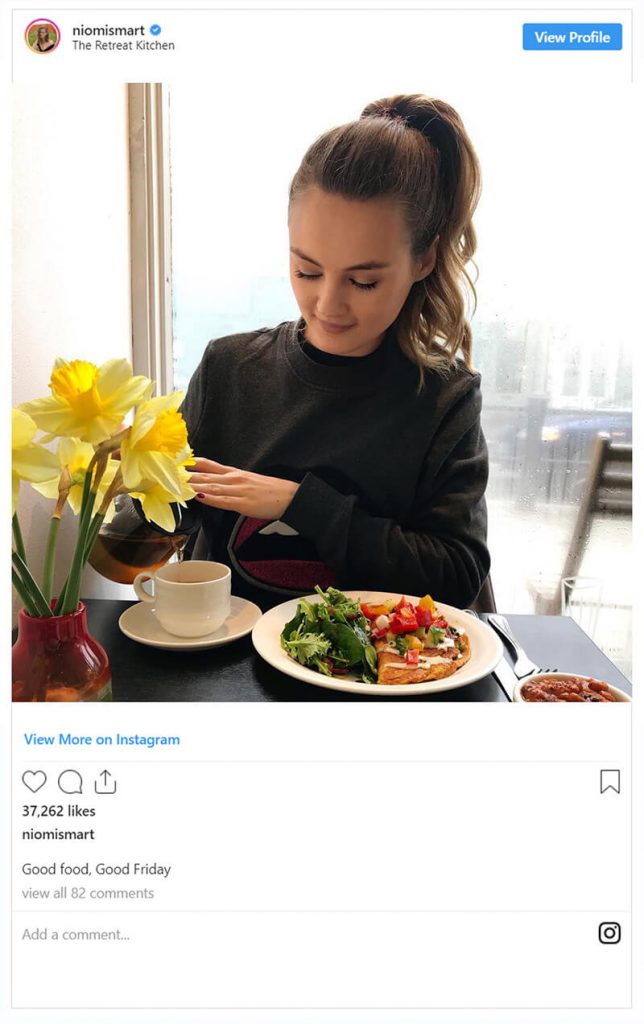 Plus, lest we forget that Instagram is a creative platform and recreating plant-based alternatives to culinary staples, like shepherd’s pie and pizza, does naturally require a little creativity.

“That’s where it gets really exciting,” says plant-based blogger Niomi Smart, who shares her plant-based lifestyle with 1.7million followers on Instagram and another 1.7million on YouTube.

“I love recreating dishes I grew up with like shepherds pie and chocolate cake and making them plant-based,” she told The Independent.

“These creative meals can all be showcased on Instagram for people to see what kind of meals can be made on a plant-based diet.”

Obviously, Instagram is also a social messaging platform that encourages its users to engage with and comment on content they find inspiring. This has been a key part in both Smart and Mills’ respective success stories. 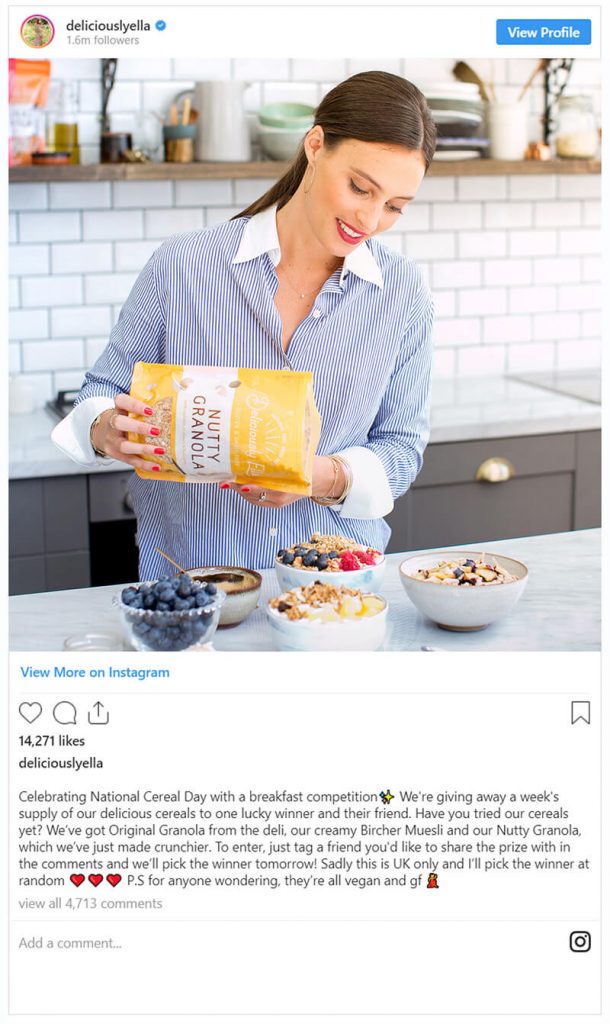 “We launched three product lines into 5,500 stores without a single person in our marketing department,” Mills said, adding that she has only just now hired a head of marketing.

“Each week we get between 12-20 million impressions on our Instagram channel,” she explains, adding that the account is run completely by herself and she responds to every direct message she receives: “normally around 300 a day”.

“Some people think I’m mad for doing it, but it’s created a really engaged line of communication and I truly understand what it is our audience are looking for and how we can be both a useful tool for them to eat more fruit and veg.”

The rise in popularity of accounts such as Mills’ and Smart’s are undoubtedly a reflection of the changing face of veganism at a societal level.

“It’s no longer represented as something unusual,” explains Dominika Piasecka, spokesperson for The Vegan Society.

“It’s easy and accessible – you can walk into any supermarket and be greeted by a huge range of vegan-friendly products.”

“Platforms like Instagram have helped people see veganism for what it really is: a compassion-driven attempt to live an ethical, sustainable and healthy lifestyle without contributing to animal suffering.”